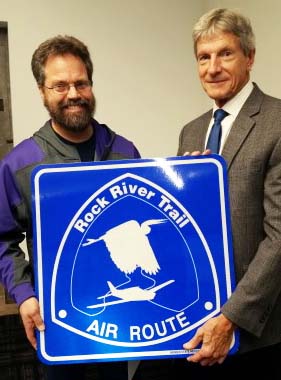 Eric Bickel, Owner of Skydive The Rock and Greg Farnham of the Rock River Trail.

With a little help from our aviation friends, the word is getting out about the Rock River Trail Air Route.

About The Rock River Air Route

The Rock River Trail Air Route features ten great airports along the river as it flows 320 miles through Wisconsin and Illinois. Each of these airports represents a gateway to the communities that the river has spawned over the many years since man has occupied the area.

First Flight In Wisconsin  – Arthur Pratt ( A. P.) Warner brought Wisconsin into the age of aviation when on November 4, 1909 he flew his Warner Curtiss aircraft at the Morgan Farm in Beloit, Wisconsin. Warner was the 1st person to pilot an a powered aircraft in Wisconsin and was the 6th American to do so. The first flight in Wisconsin is recognized with a historical marker at 1811 Lee Ln, Beloit, WI.

First Woman Aviator from Rockford, IL – Bessica Faith Raiche was the first woman in America to fly a plane. Raiche, born in Rockford in 1875, made aviation history as the first woman aviator with her Sept. 16, 1910, flight in Mineola, NY. Learn more about Rockford’s aviation at an exhibit at Midway Village Museum, 6799 Guilford Road, Rockford, IL.