Jake Gress, Jake Boucher and Garrett Feik are nearing the end of their start-to-finish kayak trip of the Rock River.

Paddling from Oregon, Ill., Friday, May 23,  the team made it to Crow Valley Campground in Sterling, Ill.–a 35-mile trip.

“Dan and Shelly Long assisted us in maneuvering around the dam and they even provided us with lunch!” Garrett Feik said via Facebook. “Dan and Shelly have their own outfitting business called Eagle’s Bluff Outfitters. They provide guided canoe trips along the most beautiful stretch of the Rock River. We highly recommend them. Great people and extremely knowledgeable.

“Then, in Sterling/Rock Falls we were greeted by both mayors along with reporters and other individuals who have a significant influence in the community. We were even given a key to the city of Rock Falls! What an honor to say the least. We never thought our trip would generate the response it has but we are extremely grateful for it.

“We only wish this trip can help others as well. Please keep continuing to make donations to Maranatha Baptist University and get out on the river! We need to support the Rock River Trail in helping to conserve this great natural resource.

“Jeremiah 32:17- Ah Lord God! Behold, thou hast made the heaven and the earth by thy great power and stretched out arm, and there is nothing to hard for thee.”

The paddlers have also been assisted along the way by several Rock River Trail spokesmen, including Frank Schier, who founded the trail in 2010.

They will be on the water over the Memorial Day weekend; the trip was initially scheduled to conclude Thursday, May 29. Because they bought some time early on, they will be in the Quad Cities Tuesday, May 27, Boucher said. They started on the journey Tuesday, May 13, near Horicon, Wis.

The paddle is a fundraiser for Maranatha Baptist University, in Watertown, Wis., where Boucher and Gress are students. They hope to raise as much as they can through donations to help pay for athletic uniforms and paint the school’s gymnasium.

Feik, of Aledo, Ill., is enrolled at Western Illinois University. Boucher also hails from Aledo. Gress is from Pekin, Ill. 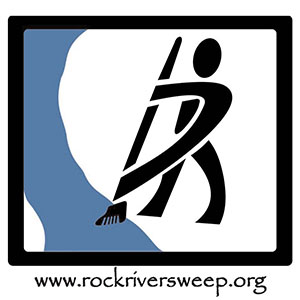