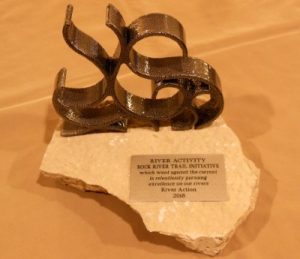 The Rock River Trail Initiative is proud to have received the 2018 Eddy Award for River Activity for its efforts “which went against the current in relentlessly pursuing excellence on our rivers.” The award is a hand-crafted miniature of the Rapids RiverWay Art Project in East Moline, Illinois.

The Eddy Awards program was initiated in 2000 by River Action, Davenport, Iowa, to recognize high-quality work of various kinds with positive and far-reaching effects on the health of our rivers and river communities.

Greg Farnham from the Rock River Trail Initative attended the April 20th awards program in Davenport to accept the award on behalf of all of us who are part of this outstanding project.  The award recognizes Frank’s vision for the RRT.  Our RRT colleague Dean Mathias and his wife Debbie were also at the awards ceremony.  Dean was an Eddy Award recipient in 2015 for his work on bicycle advocacy.

Below is the introduction that was read by the MC for our award:

The world overlooked the Rock River for far too long.  It is more geographically dynamic than we suspected.  And it is Greg’s tenacity, along with Frank’s vision, that we have to thank for that knowledge.  We would not have the trails, maps, signage, and events without their commitment and persistence.

Working with a small team of enthusiasts, stakeholders and spending their own money, they trail blazed from Wisconsin to Rock Island.  They didn’t wait for excuses; they kept on keeping on.  The biggest challenge was working with 11 counties and 41 communities to garner support.  They all saw it differently, but eventually came on board.

In 2013, it became a part of the National Park Service National Water Trails.  There are six Convention Bureaus assisting today with eight elements of the trail system.  They include: hiking, horseback riding, air route with nine airports, water trail, bike trail, scenic and historic road trail, art trail and a chocolate trail!  The current council of 17 pledged to seek public and private investment and have taken action to fulfill that pledge; if they live up to the promise, the states and municipalities may do the same.

Frank Schier, who died in 2017, was publisher and editor of The Rock River Times, and used skillfully the power of the pen.  He shared vision with non-profits, state officials, DOT’s, counties and municipalities.  Greg brought his talents as an international marketer, an educator in biology, and lake management.  Greg says today, “It was lots of hard work, inventories, knocking on doors, and many lat nights, but it is all worth it!”