JANESVILLE—When it comes to removing the Monterey Dam, the pros far outweigh the cons, a group of residents concluded Tuesday. At its second meeting, the Monterey Dam Citizen Advisory Committee moved closer toward crafting a recommendation for the Janesville City Council on removing or repairing the dam. After weighing both options, most of the committee’s 11 members leaned toward removing the dam. 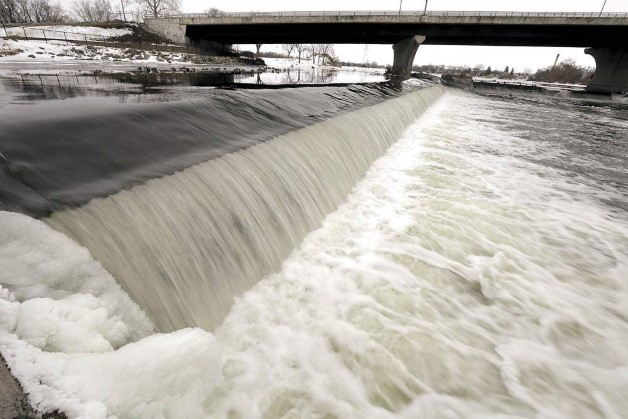 The state Department of Natural Resources has ordered the city to repair or remove the dam, which has reached its life expectancy and is damaged by scour holes and deteriorating concrete. Repairing it would keep the area looking as it has for years. Removing it would significantly narrow the river from the Center Avenue bridge to the Racine Street bridge.

Removing the dam would create a more natural habitat for fish and mussels upstream, said Beth Wentzel, a civil engineer for Inter-Fluve, a consultant hired by the city. Fish and mussels would be able to pass from downstream of the dam to the upstream area, which is good for the river’s ecology, she said. Dam removal also could boost fishing and recreation. It would expand the fishable river habitat, increase spawning areas for fish and offer more wildlife viewing opportunities, Wentzel said.

Shawn McCarten, owner of It’s a Keeper Bait & Tackle near the dam, seemed pleased with the removal idea. Currently, only about a dozen anglers can fish near the dam at one time, and he sometimes has to direct visiting anglers to other areas such as Indianford. Opening the dam could provide more space, he said. “In reality we’d all win. Not just us, but the city of Janesville,” he said.

Of course, removing the dam means fish would no longer stack up downstream of the dam, Wentzel said, but the fish can’t get very far before hitting the Centerway Dam upstream. Wentzel dismissed some common misconceptions about dam removal, including that it creates mud flats, shrinks the river upstream and decreases nearby property values.

Mud often can be spotted when water levels are lowered for dam repairs. “But in fact, what you see as mud flats … typically have a lot of … seed that has been deposited along with the sediments that are there. It doesn’t take much time for that to germinate and start coming up,” she said. “Something will grow there.”

The question is what will grow and how it can be maintained, she said. The widest part of the river is between the Monterey Dam and Racine Street bridge, adjacent to Monterey Park. If the dam were removed, the river channel would shrink from about 600 feet wide to about 150 feet wide, city engineer Mike Payne said. The river would be narrower from the dam up to the Racine Street bridge, but downtown Janesville would see minimal difference in water depth and width. Wentzel cited a study that concluded that property values don’t drop—and sometimes increase—when dams are taken out.

Committee members discussed potential improvements they’d like to see with dam removal, including channeling the river closer to Monterey Rock, erecting signs to point out historic landmarks and building observation decks. McCarten suggested expanding banks into the river, which would break up the current and make fishing more lucrative.

Rough cost estimates peg dam repair at about $700,000 and removal and moderate restoration at about $1.1 million. Removal would include a $400,000 grant, putting both projects in about the same price range, Payne said.

The committee will meet at 5:30 p.m. Tuesday, Feb. 7, at City Hall. Members will discuss more detailed restoration ideas they’d like to see if the dam were removed. It’s possible the committee will formulate a recommendation to the council, but the DNR hasn’t given the city a hard deadline, Payne said. The city will hold a second community engagement forum after the committee’s final meeting. The council will likely make a decision by May, Payne said. Dam repair or removal would begin in 2018, he said.