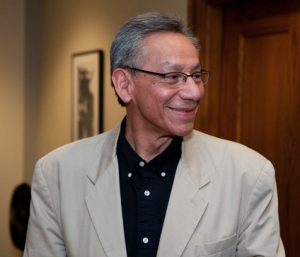 We are pleased to invite the public to the dedication of “Ke-Chunk Ciporoke” by Wisconsin Ho-Chunk artist Truman Lowe (1944-2019). Lowe created this sculpture to honor the Ho-Chunk people who once lived along Turtle Creek at Ke-Chunk village until 1832. 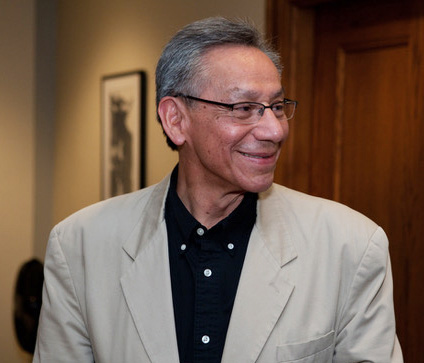 The dedication ceremony occurs immediately following the 1pm “Who Once Lived Here? | Ke-Chunk Village At The Confluence” program which is held in the Learning Center. The dedication will occur at approximately 2pm at the sculpture installation overlooking Turtle Creek.

At the dedication Wisconsin Dells Singers, a Ho-Chunk drumming group led by Elliott Funmaker, will sing an honor song in Truman’s memory, and to honor the Ho-Chunk people who lived at Ke-Chunk village. .

What is the Meaning of Ke-Chunk Ciporoke? Ke-Chunk (“kay-chunk”) means “turtle”, and Ciporoke (“chee-poe-doe-kay”) means “round dwelling” in the Ho-Chunk language. It is the type of home a family would have lived in, though often families lived together in a single, larger oblong dwelling. The structure would have been made of saplings and covered with reed or grass mats.

At the confluence of Turtle Creek and the Rock River there was a very large Ho-Chunk (Winnebago) settlement called Ke-Chunk (Kečąk) or Turtle Village until 1832. The sculpture will be installed overlooking the area of Ke-Chunk Village as a reminder of the people that called this place home.

This sculpture concept was born from a student project at Beloit College and came to life with Truman’s assistance last year. Truman finished the art piece earlier this year, not long before he passed away. His long time friend Jo Ortel, art professor at Beloit College, and author of a book about Lowe, has worked hard to get the full size sculpture installed at Nature At The Confluence.

About Truman Lowe Lowe’s sculpture is an artist’s interpretation, not an exact replica. “I am interested,” he once said, “in finding that point in time when history stops and myth begins.” Born and raised on the Indian Mission in Black River Falls, WI, Lowe studied art at the University of Wisconsin-LaCrosse, then taught sculpture at UW-Madison for 35 years. Lowe’s art can be seen in the collections of many prominent museums, including the Denver Art Museum and the Eiteljorg Museum (Indianapolis, IN). He’s received many honors in his life, including a National Endowment for the Arts Individual Fellowship in 1994 to pursue sculpture and the commissioning by the White House in Washington D.C. in 1997 to create a sculpture for a yearlong exhibition to honor Native Americans. Most notably, from 2000 to 2008 Truman Lowe held the position of Curator of Contemporary Art at the National Museum of the American Indian of the Smithsonian Institution.

Ke-Chunk Ciporoke honors Ho-Chunk history, but as the work of a nationally-renowned sculptor, it also stands as a testament to the continuing vitality of the Ho-Chunk people.

How To Support The Sculpture – Donations to support the sculpture installation are still being accepted. If you are interested in supporting this project with a tax-deductible donation, you may make a contribution to Be Active Outdoors, Inc., c/o Nature At The Confluence, 306 Dickop Street, South Beloit, IL 61080. Your donation of $500 or more will be recognized with a Turtle plaque on the donor wall at Nature At The Confluence.