Hmmm, Could this work on the Rock River Trail? 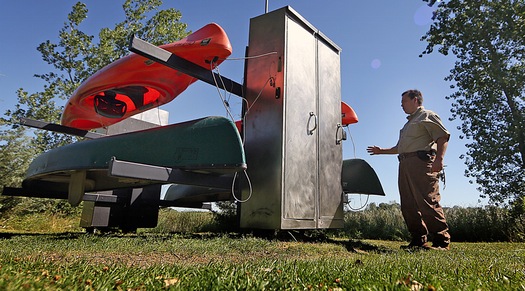 A canoe ride on the Mississippi River, the stuff of dreams for many, could soon be possible on a whim.

The National Park Service is working on a plan to create a canoe-sharing service in the 72-mile-long Mississippi National River & Recreation Area, making it possible for residents and tourists to play on the urban river, as well as up and down its shores, without a car.

Instead, they’d rely on a network of canoes, bicycles, buses and the Northstar commuter-rail line. Canoes and bikes checked out at one location could be left at another location up or down the urban river corridor.

Planners hope to launch the project in 2016, the National Park Service’s centennial year.

“We represent the Mississippi, which is America’s river. There is a lot of romance to that,” said Susan Overson, landscape architect and park planner for the river park. “We see this as a way to attract people to our park as a destination. They want to put their feet into the Mississippi, and we are trying to make that easier for people to do.”

The program also hopes to draw locals who’ve only seen the mighty Mississippi through car windows.

“Most people don’t even know there is a national park in the Twin Cities,” Overson said. “It’s here and it’s in our backyard. People have lived here their whole lives and never been on the river.”

Planners expect to have $152,000 for the project, including federal dollars and a $20,000 donation from outdoor-gear retailer REI. They’ll use it to install handicapped-accessible docks and to create an electronic checkout system. Overson said there is talk of having 36 to 52 canoes in circulation. Canoes and bicycles would be available at three locations, including Mississippi West Regional Park in Ramsey and at the Coon Rapids Dam downriver. The third location has not been determined.

Planning will require a matrix of partnerships.

“We are a national park that owns very little land,” Overson said. “There are a lot of really good people at the table talking about this canoe share.”

The idea has taken inspiration from the Twin Cities’ popular Nice Ride bike-sharing service. Since 2011, the National Park Service has poured more than $1 million into about 50 Nice Ride stations in Minneapolis and St. Paul. The nonprofit operates 170 stations and additional programs with 2,350 bicycles in Minnesota.

Nice Ride and the Park Service are “in the brainstorming phase” of the new bike- and canoe-sharing plan, said Bill Dossett, Nice Ride’s executive director.

“We are excited about that,” Dossett said. “The ridership downtown and along the river is really the core of the whole system.”

Life jackets and paddles are also available for free at the Sunfish Lake Park service.

Life jackets and paddles are also available for free at the Sunfish Lake Park service.
The Park Service is also partnering with Anoka County, the Three Rivers Parks District and the city of Ramsey, which runs a free kayak- and canoe-sharing service at Sunfish Lake Park that inspired national park planners.

If the success of Ramsey’s program is any indicator, the Park Service’s plan will go gangbusters. In the five years since it was launched, city staffers have issued 1,030 cards to Anoka County residents to use two canoes, two kayaks, paddles and life jackets for free on a first-come, first-served basis. The card unlocks the boats and gear.

The program has enjoyed smooth sailing, said Ramsey Parks Superintendent Mark Riverblood. Thefts and vandalism have not been an issue. One kayak had to be patched because it was used so often that it developed a hole on the bottom from being repeatedly dragged to the water.

The program gives residents a chance to enjoy a sport that otherwise can take time and resources many don’t have. A conventional paddling trip can require a lot of planning and work, including acquiring a boat and tying it to your vehicle.

But a boat-sharing program makes it easy.

“Just on a whim, they go on a 20-minute paddle. They go on a lunch hour,” Riverblood said. “It’s very convenient.”

Riverblood understands the passion for paddling.

Ramsey resident Jeanne Bolstad uses the city’s canoe- and kayak-sharing program to get out on the water. “We just really enjoy it. It’s a way for people to get out and see nature,” she said.

Ramsey resident Jeanne Bolstad uses the city’s canoe- and kayak-sharing program to get out on the water. “We just really enjoy it. It’s a way for people to get out and see nature,” she said.

“I’ve paddled my entire life,” he said. “I grew up along the Rum River. My family has owned land on the river since the 1800s.”

Jeanne Bolstad has lived a block from Sunfish Lake for 13 years, but it wasn’t until the Ramsey canoe- and kayak-sharing program began that she got out on the water.

“I love it. Certainly, it’s a nice way for people to go out and enjoy what’s there without owning it all,” Bolstad said. She used the boats three times last season. Her son also likes to go out occasionally, and it’s also popular with her out-of-town guests.

It’s fun to glide across the water and see up close the sandhill cranes and loons that she hears from her house.

“We just really enjoy it,” Bolstad said. “It’s a way for people to get out and see nature.”